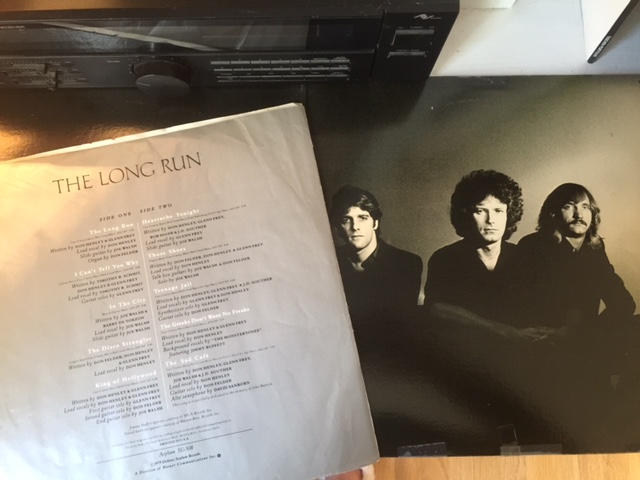 Glenn Frey, as you’ve probably heard, died yesterday.  This one hurt me in a way that the others who’ve passed this month, have not.  Glenn’s passing was a direct conduit to my childhood and my dad.  Another reminder that people who aren’t that much older than I am, are facing their mortality and leaving behind their legacies.

In 1979, the Eagles were probably nearly burned out by their own accord.  But they were in top rotation on nearly every US radio station.  Certainly the ones I listened to from McDonough, Georgia.  And always they were played loud and proud at our local skating rinks.  Their brand of “country rock”, their flannel-shirt hippiness, their LA-cool yet down-home lyrics are some of my musical bedrock.

In ’79, I would have been in either 7th or 8th grade.  That was such a musically-influential time for me. My dad always had a sophisticated taste in music with a song’s melody and backbeat being two of his standard-bearing criteria.  The Eagles met and superseded both, to him.  At the time, he and one of our neighbors had a cabinet-making business.  They had a job installing new speaker cabinets in the mother of all Atlanta concert venues: The Omni.  Luckily, I was home when the phone rang.  It was my dad shouting only 3 words to me, holding out the phone on his end: “Listen to this. . .”  He and his friend Massey were working when The Eagles were doing their soundcheck.  He went to a payphone near one of the arena entryways, put in his dime, called me and let me listen.  The song coming through to our McDonough kitchen was “Heartache Tonight.”  And this was when the musicians did sound checks themselves.  Funny, but it’s the low drums that I remember most.  Somewhere between 12 and 13 years old, I had my own one-minute private listening party, and the talent was none other than those guys.  The Eagles.

The song-writing genius of Glenn Frey and Don Henley is one of the musical-loves of my life. Right up there with Buckingham-Nicks, and the Brothers Gibb.  Rest in peace, Glenn.  You’re part of the fabric of my musicality.  When I heard the news yesterday, I went straight to the album that conjures up this memory and played it at least a half-dozen times.  #RIPGlenn