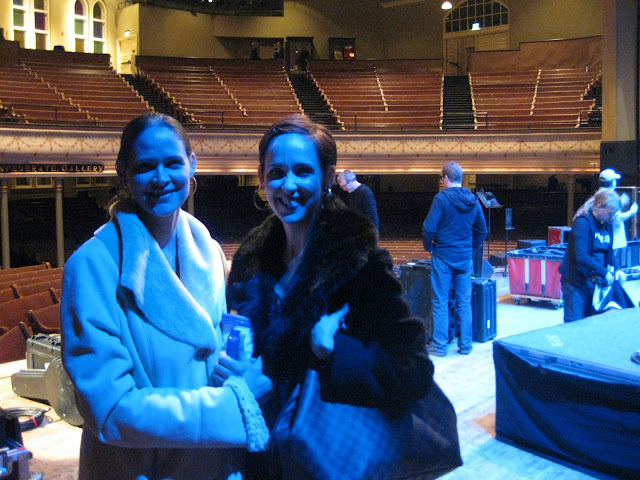 Under blue lights on the Ryman stage 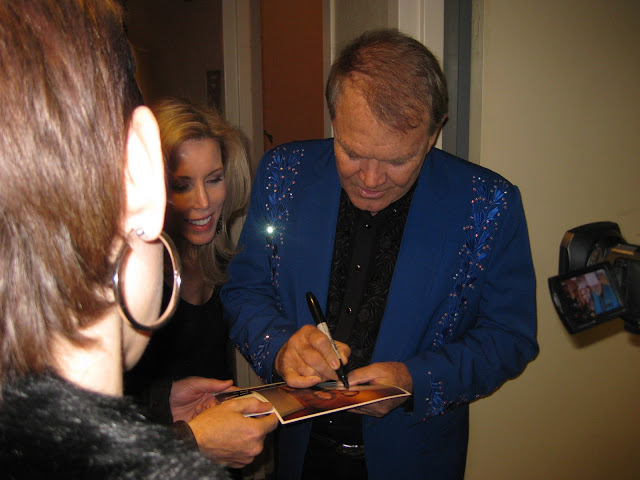 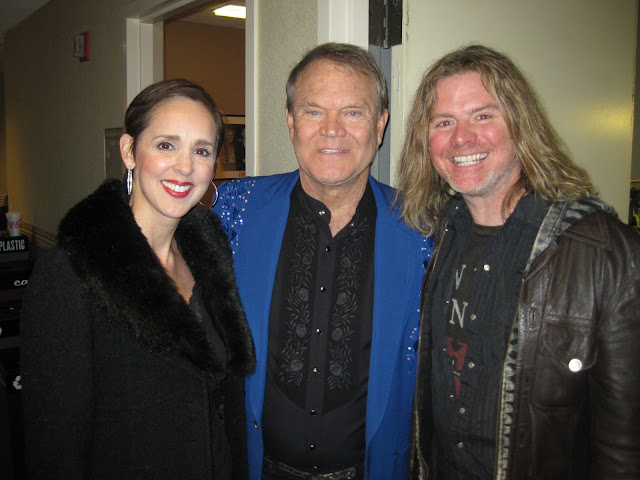 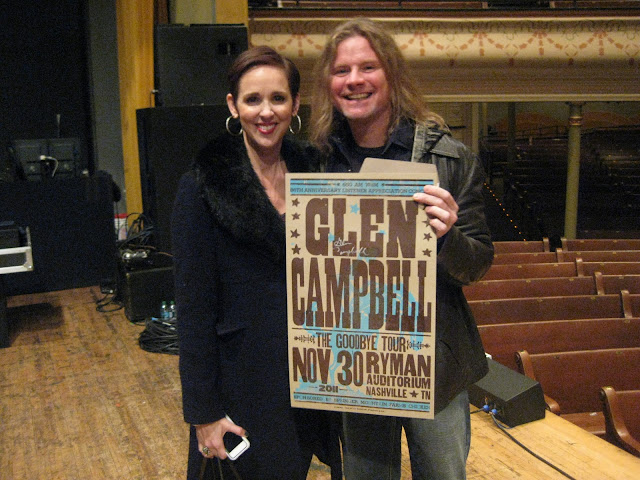 I feel the urge to write about one of the most amazing things that’s ever happened to me, but I also feel torn about the medium I’m using: my makeup blog.  How do I relate this to MAKEUP???  Here goes:

I had one of the most full-circle experiences of my life two days ago: I had the amazing good fortune to be able to meet my all-time favorite music icon, Glen Campbell.

Glen Campbell is my first musical memory.  In 1969 my dad put me on his shoulders at the Kentucky State Fair in Louisville so I could see over the heads of all the other people to get a look at my early childhood idol.  I remember looking over the crowd and seeing a redheaded flop-top bound on to the stage with an acoustic guitar.  I don’t remember what he sang; I mainly remember the utter joy that I felt then, at age 3, seeing this man who until that point, I had only seen on his Good Time Hour tv show.  That same exact feeling washed over me two nights ago at the Ryman Auditorium when I got to stand next to him and meet him.

I’ll be the first to admit. . . this is a Daddy-thing.  Gordon McCully’s love of Glen Campbell’s musicianship (in his opinion, the best guitarist ever), his collaborations with Jimmy Webb (songwriter extraordinaire), and his down-home good-mannered way. . . all trickled down to me.  I loved Glen as much, if not more than my dad.  Compound all this with the fact that my dad was a redhead as well, both men took/take great pride in our Scottish heritage, and both Daddy and Glen were born in the same year, 1936.  I feel like I have all kinds of karma with Mr. Campbell.

Toward the end of my dad’s life, he had become something of a homebody.  He didn’t care to wander too far away; he preferred the creature comforts of his own surroundings.  But in 2006 we both celebrated milestone birthdays: his 70th and my 40th.  It was a momentous occasion that called for a big celebration, just the two of us.  So he agreed to go on a road trip with me to Nashville and the Ryman Auditorium to see our all-time fave, Glen Campbell.  It was to be the last trip my dad and I would spend together, and it was the best quality time I’ve spent with him as an adult.  He bragged about that trip to anyone who would listen.

Since then, Glen Campbell has publicly announced his diagnosis of Alzheimer’s disease.  He and his beautiful wife have spoken candidly about it, and he has embarked on this Goodbye Tour that’s scheduled far into spring, 2012.  This diagnosis strikes home as well, because of my mother’s recent diagnosis.  Again, worlds collide, and I just sit and wonder at the workings of it all.  When I heard about his Goodbye Tour, I knew I’d make plans to go see him, and this time my sister Jenny would come along.

Jenny and I met up with my dear friend Robert Kearns, who is a touring musician and also a Glen Campbell fan.  Robert has a distinguished musical resume, and although he is never quick to drop a name or the fact that he’s the bass guitarist for Lynyrd Skynyrd, well. . .it has its perks.  He has always made fast friends, and it should have come as no surprise that Glen Campbell’s road manager would be  one, but I honestly had no idea that would actually get us some place on November 30.

Robert came prepared with an old photo he’d had made with Glen, while he was touring with the Brad Paisley camp.  Glen remembered him and was especially pleased after learning of Robert’s current gig.  I was standing there, just drinking in the fact that I was merely inches away from my icon.  Introductions were made and there I was shaking hands and smiling face-to-face with Glen Campbell.  Still the most gracious, sweet-natured man I imagined him to be.  Only now I was aware that there was a camera man standing nearby filming this.  I remembered my sister standing next to me, so I grabbed her wrist and pulled her in close to me so I could introduce her and here’s what happened:

It was a Little Richard song that we had on an album in my home growing up, called “The Georgia Peach.”  I KNEW THAT SONG and before I realized it, I was joining in and singing with him, hitting that high note “woooooooh. . .”  Glen looked at me and smiled.  Jenny and Robert looked at me as if to say, “Really???”  And I just laughed.   As we walked away from our meeting Robert said, “. . .you do realize you just sang with Glen Campbell?”

Well, the guy with the camera approached us as we walked back across that famous old Ryman Auditorium stage.  He told us that they were filming a documentary about Glen’s life.  He asked Robert to say his name and contact info so he could get permission from us if they use it in the finished project.  And before I knew it, I asked if I could tell him about my Glen Campbell back story, and he said of course.  So I did, starting with my 3-year old memory, and my voice broke and I kept talking nearing the verge of tears.  And he looked at me from behind his camera, and said, “Wow.  How did tonight’s experience match up to your memory of 1969?”  And I told him exactly what I felt: it was simply the same JOY I felt then.  The exact same, only it had come full circle.

Flash back to a few hours prior: as Jenny and I were getting ready in our hotel room for the show that night, I made a very conscious decision to wear red lipstick, which I rarely do.  I wanted “a look.”  So I opted for my NARS “Cruella” Velvet Matte Lip Pencil.  I felt sassy, and look what it got me 🙂

Love and Light to my father (who I know was there with me); my sister Jenny; Robert “don’t-ever-doubt-the-Kearns” Kearns; and Glen Campbell. . .who has brought me and my McCully family more joy in our lives than he’ll ever know.

Thank You and Good Night.