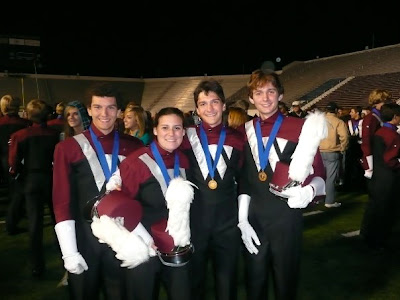 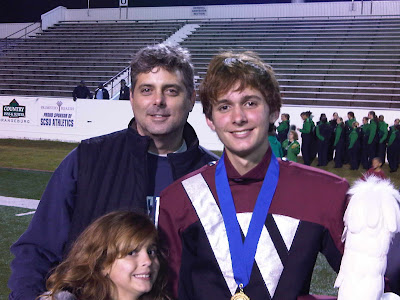 Can a Mama brag for just a minute? We’ve had a very kid-centered week or two here in the Lesch household, all revolving around music. It’s been a state of grace, actually.

Son #2, Culley, has embarked on an adventure his freshman year of high school known as The Wando Warrior Marching Band. The WHS band is a magnificent organization headed up by the most amazing director, Scott Rush and his assistant directors, Sean McGrew and Lanie Radecke, drill master Tim Cole, and art director/visual coordinator Michael Gray. Jessica Crum and Bobby Bethea direct the WHS Color Guard.
Band rehearsals started in mid-July. These kids gave up a solid month of their summer break for 13-hour days in the hot South Carolina sun in order to begin preparing for the prize: a trip to Indianapolis for Grand Nationals. . . the “Holy Grail” of marching band competitions here in the United States. Wando has a proud tradition of being among the best, if not THE best high school marching band in SC. However, this would be its first showing at the national level. Excitement throughout the marching season was palpable with the running countdown to the regional competition in Atlanta, the state competition in Orangeburg, and then to November 14 for Grand Nationals.
Weeks were consumed with 3 days of after-school rehearsals, plus football games on Friday nights, and weekend exhibits or competitions. Of course, this is in addition to the kids’ academic classes and it has been Culley’s life since July. He’s loved every minute of it. This band has provided so much more than music. It’s been a refuge in a school with over 3,300 students; it’s been a place to bond with other kids who love the same things he does; it’s been food for his brain and nourishment for his body; it’s been more physically taxing than any P.E. class would request of him. We have truly learned the meaning of the “Wando Band Family.”
As a freshman band parent, I was on the periphery looking in; I was a bit overwhelmed by the scope and magnitude of this operation. It’s daunting. But what I learned was, like a colony of ants, there’s a job for everyone. . .there’s room for everyone. These people get things done! As a novice band parent, I’d like to make a disclaimer here. . . if I’ve gotten any names wrong or left any one out, please accept my apologies and chalk it up to my newness 🙂
I’d like to publicly thank all those other parents who treated and fed and nursed my son as if he were their own. All the parents who gave him water in the sweltering heat; nurses and physician parents who answered the calls of help when needed, all the merchants who donated food, water, and Stuff; the uniform committee who saw to it that my son had a stunning uniform that fit his exponentially-growing legs; the moms and dads who helped check luggage for field trips and went on the trips so my son could feel safe and secure. Thank you, thank you, thank you!
To Mr. Rush and staff. . . my gratitude runs deep for the life lessons you’ve taught these students: Graciousness and humility go so far in life; it builds character. All band students from all high schools are out there doing their best, too . . . they deserve our utmost respect and courtesy. Discipline is a means to improvement but self-discipline is a means to true understanding. And the list goes on. The WHS marching band is a microcosm of the best of humanity.
Fast forward to Sunday, November 15, as I’m waiting for Culley’s bus to pull into the Wando parking lot, along with 300 other parents and family members with signs, noise-makers, sparklers, bull-horns, and posters, I’m thinking about the goals that were met. The first place win in the 5A South Carolina band competition; the 4th place win at the Bands of America regional competition in Atlanta; and now, (drumroll please) the 11th place win at the Grand Nationals. The goal from the outset. . . and I understand it was a lofty one since this was Wando’s first trip to “Grand Nats”. . . was to place in the top 12. And by golly, they did it!
All this hard work and dedication paid off. It was a wonderfully proud moment, when those 5 motor coaches pulled in, with a Mount Pleasant police escort. That’s when the tears poured out. . . seeing my son come off that bus with a large medal around his neck and the exhaustion over his body. That’s when I knew this was more than worth all the work, trips, expense, time, and energy. Not only was it worth it, it was a moment of rededication to next year!
Go Wando!
www.WandoBands.org