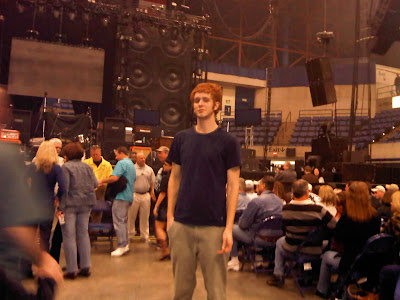 WARNING: Extremely proud Mama comments are forthcoming. Read at your own risk. Jordan, don’t ask me to delete this 🙂 Also, digressions are made all over the place.

Rounding out the Proud Mama / musical weeks referred to a couple of days ago, I have one more experience to relay. This one involves Son #1.
While Culley was off in Indianapolis winning national finalist honors with his high school band, and Livi and Jim were having their own Daughter/Daddy weekend complete with pedicure and date night, Jordan was with me.
Jordan is a sophomore at USC in Columbia where he’s a morning deejay for WUSC-FM (90.5), the campus radio station. He’s a graduate of the Charleston County School of the Arts (symphony major), and an all-around music lover. Because of his classical training at SOA, Jordan has a deep appreciation for all things music. Currently, improvisation and jazz are his favorites. My appreciation of music, which runs just as deep, is based on nothing technical, but on pop-culture. I love the history of music, lyrics, bands. . . the stories behind how things and relationships came to be. What dynamics were playing out among a band when they wrote a certain song? And of course, how certain music represents different stages of my own life. Was it a good time, a rough patch, childhood?
Well, last week the stars, moons, and planets aligned. I had urged Jordan to make a trip with me to Georgia to visit my mom. It was her birthday and it had been over a year since he’s seen her. To my utter pleasure when I asked him to go along with me, he didn’t argue or give any excuse about why it was inconvenient, etc. He just said, “Okay, Mom. I’ll go.” I didn’t even have to sweeten the deal, which is what I was prepared to do. So, what happened next was just icing on the cake.
My friendships run deep. . . I have close, dear friends from elementary school through college through various jobs over the years that I still keep in touch with. A couple from my college days are currently professional musicians. One recently landed the job as new bass player for Lynyrd Skynyrd.
Well, as luck would have it, LS was playing in Augusta, GA, which was on our direct route to my mom’s house in Monroe. Jordan and I got hooked up. . . tickets, passes, and some quality time with some old-school rockers. But my son impressed me more than anyone. And sometimes it cracks me up because I don’t know where these qualities come from. There was nothing that intimidated him about any of this. None of the security, screaming die-hard fans, a full James Brown Arena, backstage access, dressing-room/catering; none of it daunted him. He was open and happy and at his most pleasant self. For any one who knows any of the LS history, there’s currently only one original member with the band: Gary Rossington. He survived the plane crash that took the lives of six members of Skynyrd back in 1977. My friend tells me he’s very low-key, a “man of few words,” and due to his demeanor, revered among the band and fans alike. Well, to see this man walk out and shake my son’s hand and tell him how nice it was to meet him, was a bit surreal. Then there was Johnny Van Zant, and Rickey Medlocke, and all of the other members. Each and every one commented on Jordan’s height and red hair which he took good-naturedly. But the highlight of the evening came when the sound and lighting engineer stopped to chat and invited Jordan back to the boards for the show. So, my son didn’t sit with me for any of the concert, but at the back with a birdseye view of how a Lynyrd Skynyrd show is put on. He was as happy as he could be, and once again, I was a proud Mama.
Only one regret from this: I didn’t take pictures. Except one. It was taken with my Blackberry after Jordan had explained how much each amplifier cost (and there were many of them). He got up and let me take his photo so I could text Jim and give him the play-by-play of what was going on.
One last note that brings this full circle: last March when my friend called with the news that he would be Skynyrd’s new bass player, I got out my “Street Survivors” cd just to put it back on my radar. That same night, Jordan texted me before going on air at WUSC. It said, “Mom, what should I play?” I said the first thing that came to mind, “how about ‘Street Survivors’ by Skynyrd?” Evidently the show went well. He sent another message that said he’d received a record number of calls from listeners thanking him for playing some classic Southern Rock.
Thank you Universe; thank you Robert Kearns; thank you Lynyrd Skynyrd; thank you, Jordan.
www.LynyrdSkynyrd.com
www.WUSC.sc.edu